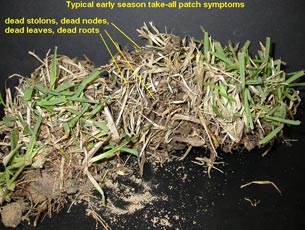 Take-all patch is a serious root rot disease from a soil-born fungus. It was first discovered on St. Augustine grass in 1991 but has also been found in bermuda, zoysia and centipede grass. Early symptoms are yellowing and thinning turf in circular or irregular patches. The roots are often short, blackened and rotten. The grass stems can often be lifted from the soil due to the poor root system. The yellowing grass blades eventually die and become brown, followed by stolon death. This is often misdiagnosed as Rhizoctonia brown patch. The early symptoms are the same, but the grass blades don’t yellow and can’t be easily removed from the stolon with brown patch. The base of the brown patch infected blade is usually slimy and rotten. The key difference is that the stolons remain green with brown patch allowing the grass to recover in the spring. The most effective way to control these is through cultural and chemical practices. Good drainage is important. Low areas in lawns that remain under water after heavy rains are highly susceptible.

A common mistake is to water shallow and frequently. It is better to water infrequently but deeply (6-8 inches) as needed. Grass needing water becomes dull color and the blades will fold. Less frequent watering reduces fungal development and produces a stronger, deeper root system. The turf varieties we use in Texas are warm-season grasses and primarily grow from April through October. Your lawn will use less water during the fall and winter months as it goes dormant.

Don’t expect your grass to stay green and growing from November through February just by watering more. If you have an irrigation system, it needs to be reprogrammed to reduce watering for the winter. Also, water early in the morning to allow the grass to dry before noon. Evening waterings increase the humidity and moisture level and encourages fungal root rot. Proper fertilization will keep grass strong and healthy. A fall fertilization with a slow-release nitrogen fertilizer is encouraged. Fertilize with a “winterizer” (50-70% slow release nitrogen) before mid November.

Rake your lawn to remove diseased grass blades and accumulated thatch as soon as you see dying grass to allow air circulation and reduce humidity at the soil level. It also loosens the soil surface and allows for better penetration of chemicals. Fungicide applications should be considered where take-all root rot is present. Fall applications as symptoms first appear have proven to slow the fungus. Fungicides that are labeled for control of these diseases or that have shown promise include: Banner Maxx, Heritage, Patchwork, Rubigan A.S., or Twosome Flowable. Waiting until you have large areas of fungal outbreaks is too late to use the fungicide. Follow directions when applying any chemical. Note that these products should not be applied during high temperatures. Fungicides should be applied in a high volume of water so the fungicide dries on the leaves and can move down into the root zone. Making two or three applications at three-to-four week intervals may also increase effectiveness.

Reduce soil pH to 5.5 to 6.0; avoid use of alkaline soil amendments; improve soil drainage; maintain water balance; aerification program; use of acidifying fertilizers; balanced fertility program; raise mowing height; do all you can do to prevent stress on grass.

Fungicides may not be effective; difficult disease to control; use a preventative program in fall and spring; fall applications probably more effective; very important to water fungicides in as deep as you can; replacing the turfgrass without applying a fungicide will only result in the infection of this disease to the new sod.