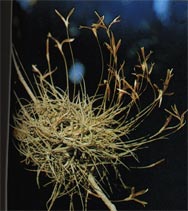 Ball Moss is an epiphyte. Ball Moss has caused concern with Texas homeowners for many years. It grows on the bark of many Austin shade trees. Ball Moss first occurs as small grey-green tufts. It is composed of many individual plants that develop into a dense “ball” in a short amount of time. These holdfasts often completely encircle a limb.

Spread is primarily by airborne spore. Ball Moss thrives in low light, high humidity areas. Ball Moss kills by suffocation and deprivation of sunlight. It takes nothing from the tree. It first kills smaller branches, which often leads to large branches. Ball Moss jeopardizes the aesthetics of a tree, as well as its health. The use of the fungicide, Kocide 101 at the rate of 4 to 6 pounds per 100 gallons of water will control the plant. Kocide is labeled for year around use.